According to research from Niesel the latest research regarding Outdoor Advertising over 67% of people in big cities spend a time of 4 hours 33 minutes outside the home during working hours. In Jabodetabek the time is much higher, where people spend time outside the house on average 4 hours 45 minutes. When doing activities outside the home, people usually spend 1 hour 18 minutes on their way. This study was conducted by Nielsen Media in 11 cities in Indonesia.

From the findings of this study, it becomes a consideration and a great opportunity for brand owners to maximize the use of outdoor advertising in promoting their products. Another interesting thing that is also a concern of society, especially in the city of Jakarta is the type of outdoor advertising space to move. Such as advertising on public transport (Commuterline or KRL, Transjakarta) to attract up to 45% or in a private car (32%) and 16% of people said they had seen some of the ads posted in the building (office or Shopping Center). 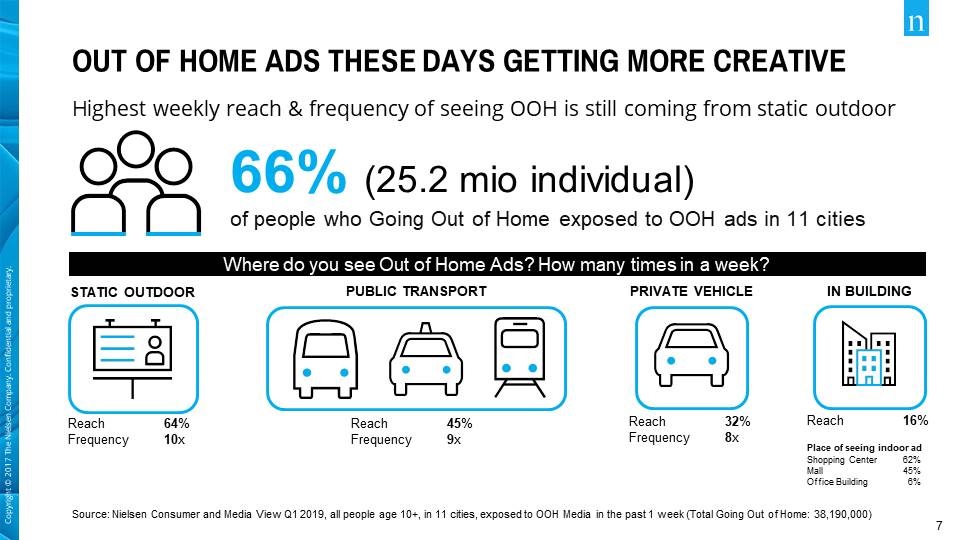 The results of this study certainly found different results from one city to another. When compared with the Jabodetabek area, the reach for advertising on public transportation for the Medan and Makassar areas reached 50%. In Makassar, ads placed in the building reaches more than 30% in comparison with the bead area.

According to Hellen Katherina as Executive Director of Media, Nielsen Indonesia “From our analysis of major cities in Indonesia (Jabodetabek, Medan, Makassar) we see that there are differences in people’s preferences in viewing outdoor advertising”. Hellen also said, especially in Makassar, advertising in buildings received more attention from the public.

The results of calculations from Nielsen for the number of outdoor media points in 11 cities in Indonesia in 2019 showed that there were more than 3,000 points and 33% were in Jabodetabek area. Billboards dominate with 43% followed by large billboards of 18% and LED shaped 14%.

Cigarette advertising is the most product categories advertised on outdoor advertising with over 1,000 points, followed by the online service with 600 points, and telecommunications more than 300 points. Djarum, Gudang Garam and HM Sampoerna is the biggest advertisers in the category of cigarettes. Meanwhile Tiket.com, Grab, Gojek dominated the Online Services category, and for the existing Telecommunications XL, Samsung and Telkomsel. Hellen said “the proportion of people who spend a lot of time outside the home as well as various forms of promotional media outside the home requires industry players not to be smart in choosing outdoor media, but also to be creative in presenting these forms of promotion.